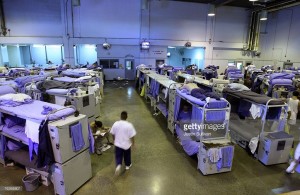 Jerry Brown is proposing a voter initiative to reintroduce parole hearings and early release.  If this new sentencing law is passed, non violent felons will come up for parole once they complete the basic term for their crime.  This is a major shift from the “determinate sentencing” law which was put in place (and signed by then Governor Brown) in 1977.

Before 1977, discretion for the length of a convicted felon’s sentence was primarily in the hands of Judges and parole boards. For example, a defendant convicted of second degree robbery might be sentenced by a judge to to “5 years to life.” After 5 years, that person would be eligible for parole, and a parole board would decide whether or not the inmate had been sufficiently rehabilitated to be released.

This system changed in 1977, when a coalition of “tough on crime” conservatives and progressives, who felt that the unfettered discretion of parole boards led to inequity, led to passage of California’s determinate sentencing law.  This law requires most inmates to serve their full sentence,  a determinate number of years which is determined by the legislature.  California was the first state to pass determinate sentencing, but it was then adopted by other states and the Federal system.

Since 1977, there has been a dramatic increase in the state’s prison population, as new laws are passed by the legislature and voter initiative which increase basic sentences and add “enhancements” to sentences, increasing prison time for use of guns, for gang context, or for having a prior felony record.

If passed, Governor Brown’s proposed new sentencing law to allow parole eligibility for non violent felons would be a major step forward to reducing draconian sentences in California, and part of a trend in this direction nationally.  Predictably, the California District Attorneys Association is opposed to the initiative and recently filed a lawsuit to block the measure.