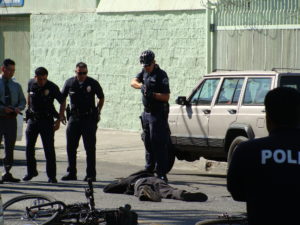 Suppose you have a run-in with a police officer who you suspect is a “dirty cop?” Someone who has a history of using excessive force or lying or planting evidence. Can you obtain the police officer’s personnel record from his law enforcement agency?
In California, the answer used to be a resounding “No” in most cases. For the past 40 years, California law enforcement officers have been protected by statutes and court rulings – the strictest in the nation – that made it illegal to release virtually any police personnel records to the public. The only way to get around these laws was to file something called a “Pitchess” motion in court, asking a Judge to order the law enforcement agency to bring the officer’s personnel records in to court for the Judge to review. “Pitchess” motions were created following the 1974 California Supreme Court case of Pitchess v. Superior Court. Most criminal defense lawyers will tell you that “Pitchess” motions are difficult to prevail on and limited in their effectiveness. They require the defendant to make a showing that the requested records are relevant and material to their defense, and the procedure for the motion allows the Judge to decide what to disclose, after an “in camera” review of the records in his chambers with lawyers for the police (without the defendant or his lawyer being present). The disclosure is, in most cases, limited to the names and addresses of any persons who have filed complaints against the officer, without any other information.

Two new California laws have turned this all upside down. SB 1421, which becomes effective on January 1, 2019, allows the general public to obtain personnel records for law enforcement officers who have been involved in or investigated for a police shooting or use of deadly force or who have had a “sustained finding” against them of on-duty sexual assault or acting dishonestly (including filing false reports and falsifying or destroying evidence).

How Does it Work?

How does a member of the public request a police officer’s personnel record under the new laws? By requesting that the agency disclose the record pursuant to the “California Public Records Act” (“CPRA”). The request can be oral or in writing (although most agencies will respond more readily to a written request). A response is required within 10 days. Many government agencies have an online site for receiving CPRA requests, with an online form, which makes it quite easy for anyone to submit a request.

So unlike the prior restrictive access provided by the “Pitchess” motion procedure, anyone can obtain these records without going to court. And, unlike the material typically released by a Judge with a “Pitchess” motion disclosure, the entire record must be produced -not just the names and addresses of anyone who may have filed a complaint against the officer in the past.

Time will tell how this all works out in practice. There was intense opposition to the new disclosure laws by statewide law enforcement organizations and I am sure there will be some pushback once records requests start coming in. And there are exemptions to mandated disclosure within the new law:  law enforcement agencies can redact records for certain specified purposes, including “to preserve the anonymity of complainants and witnesses” or when there is specific reason to believe that “disclosure of the record would pose a significant danger” to the police officer. But for now, this is a huge first step to allowing the public to determine whether and how police departments are holding officers accountable for abuses of power.