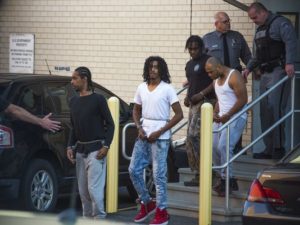 A recent article in “The Appeal” describes California Gang Laws as “normalized racism.”  Sadly, this is not hyperbole. The methodology that allows law enforcement to label someone a gang member –  often documenting someone as a gang member based on neighborhoods, friendships and families – is notoriously flawed. As described in the article, police use these flawed tactics almost exclusively to document people of color. According to a 2015 audit of the CalGangs data base, those who are identified by law enforcement as gang members are 92 percent people of color.

How did we get to this point?  In response to rising crime rates in the 1980s, California legislators instituted “gang enhancements” as a sentencing mechanism to punish and deter gang violence. The statute (known as the STEP Act) allows prosecutors to add time to baseline prison terms for adult court defendants, including youth prosecuted as adults, who are facing gang allegations. Because the STEP law created mandatory minimums, gang enhancements lead to arbitrary, excessive prison sentences. Depending on the circumstances of the offense, this could mean an additional two to fifteen years, or even twenty-five-years-to-life, in prison even if the accused isn’t a gang member himself or the individual who was most directly responsible for committing the underlying felony.

Generally, the law doesn’t allow prosecutors to allege guilt by association.  But in gang cases, the trial becomes all about the defendant’s associates and the crimes they may have committed.  As noted by a lawyer quoted in the “The Appeal” article, “It becomes this trial of the gang, as opposed to a trial of the individual.  The individual gets lost in the shuffle.  [W]hat gets highlighted are the ugly or serious and violent crimes of other gang members rather than the actual conduct of the accused in this current case.”

Ending up on a gang database if you’re brown or black is easy—you only have to be suspected of association. Getting off a gang database? That’s much harder.