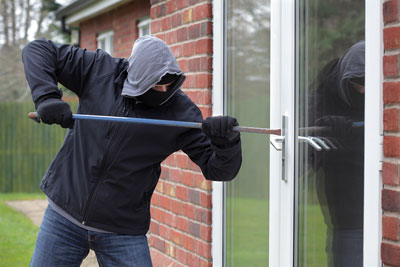 A burglary occurs when when a person enters a house or any dwelling with the intent to commit theft or other felony inside (Penal Code Section 459).

In California, it is also a crime to possess “burglary instruments or tools” with the intent to use them to commit burglary. (Penal Code Section 466)   Almost anything can be considered a burglary tool, including a crowbar or even a screwdriver!

In order to prove the crime of burglary, the District Attorney must prove all of the elements, including the defendant’s intent  to commit a felony, when he/she entered the building.  This type of property crime is frequently “overcharged” and sometimes a simple shoplifting case is charged as a second degree burglary. However, since voters passed Proposition 47 in 2014, shoplifting is generally now a misdemeanor (if you have a prior felony conviction for shoplifting, be sure to contact a lawyer about getting re-sentenced to a misdemeanor).

If you are charged with burglary or a similar crime, you need a skilled criminal defense attorney to analyze the facts and determine if there is a defense to the charges and how to best go about fighting the D.A.’s case.