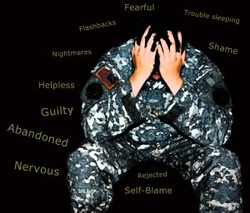 During the past decade, many veterans have returned to this country from combat in Iraq and Afghanistan with injuries affecting their ability to successfully adapt to civilian life, including psychological and neurological injuries such as Post Traumatic Stress Disorder and Traumatic Brain Injury.

These veterans frequently end up in the criminal justice system.  In fact, statistics show that nearly one in ten inmates in U.S. jails and prisons have prior military service records.

In 2009, in  the landmark case of Porter v. McCollum, the United States Supreme Court marked its approval of a growing legal trend toward leniency and a therapeutic approach to criminally involved veterans.  The decision in Porter was founded on the Supreme Court’s recognition that, “[o]ur Nation has a long tradition of according leniency to veterans in recognition of their service, especially for those who fought on the front lines …”

The law in California recognizes this tradition and the special circumstances confronting veterans facing criminal charges.   An alternative sentencing law, California Penal Code Section 1170.9 allows combat veterans who have suffered sexual trauma, traumatic brain injury, post-traumatic stress disorder, substance abuse, or mental health problems as a result of their service to get treatment in lieu of jail time. In many instances,  these cases are handled in veterans courts  where veterans are linked to services they need such as drug rehabilitation programs, housing, medical care or services offered by local Veterans Affairs offices.  Penal Code Section 1170.9 also provides that, if the veteran successfully completes all of the conditions of his or her probation, the criminal case may be dismissed and the conviction aside.

When  California law is fully utilized by criminal defense counsel to the benefit of their veteran clients,  it can provide great outcomes.  Defending veterans in criminal court can be difficult, but it is always worthwhile to fight for an outcome that provides opportunities for an injured veteran to become  a productive member of civilian society, rather than just another statistic in the criminal justice system.