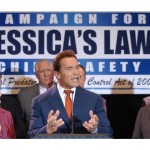 The Sexual Predator Punishment and Control Act:  Jessica’s Law (“Prop 83”) was approved by the voters in 2006.  One of its objectives was to “prevent sex offenders from living near where our children learn and play” by creating “predator free zones around schools and parks.”  The law made it unlawful for registered sex offenders to “reside within 2000 feet of any public or private school, or park where children regularly gather,” regardless of whether their crimes involved children.

In the case of In re William Taylor, et al, the Court was asked to rule on a habeas corpus petition filed by William Taylor and three other registered sex offenders on active parole in San Diego County. Taylor had been required to register under Jessica’s Law as a result of his conviction for sexual assault of an adult woman in 1991. Although he had a long criminal history, he had never been convicted of another sex crime or a crime involving a child victim.  He suffered from AIDS, throat cancer, diabetes, mental illness and was addicted to cocaine.  Upon his release he had planned to live with relatives, one of whom is a health care professional, but he was forbidden to do so because their residence was not compliant with the 2000-foot residency rule. Destitute, Taylor slept outside the alley behind the parole office – a location pointed out to him by his parole agent.  He was later admitted to a residential drug treatment program near the clinic in downtown San Diego where he was receiving treatment for AIDS.  However, the location of the residential  treatment program was also not also compliant with Jessica’s law.   The California Department of Corrections and Rehabilitation eventually placed Taylor in a boarding house in Vista, which was a three-hour bus ride from his parole office, the outpatient clinic he was required to attend, and the medical facility that had agreed to provide his medical care.

Taylor’s situation was not unusual. The Petitioners submitted evidence to the court demonstrating that the 2000 foot residency rule excludes 97 percent of the land zoned for multifamily housing in San Diego County.  The Court found that imposing such an onerous burden generally, on all registered sex offenders, without individual evaluation, could not be constitutionally justified:

Blanket enforcement of the residency restrictions against the petitioners had “severely restricted their ability to find housing in compliance with the statute, greatly increased the incidence of homelessness among them, and hindered their access to medical treatment, drug and alcohol dependency services, psychological counseling and other rehabilitative social services available to all parolees, while hampering the efforts of parole authorities and law enforcement officials to monitor, supervise and rehabilitate them in the interest of public safety. It thus has infringed their liberty and privacy interests, however limited, while bearing no rational relationship to advancing the state’s legitimate goal of protecting children from sexual predators, and has violated their basic constitutional right to be free of unreasonable arbitrary, and oppressive official action.”

This decision by the California Supreme Court is a welcome second look at residence restrictions imposed by voters on sex offenders with little or no regard to the offender’s underlying crime, or to the fairness or practical effect of the restriction.  While the decision applies specifically to the manner in which the law was being applied and enforced in San Diego County, it is clear that the Court’s holding will enable challenges to “blanket enforcement” of residency restrictions in other counties, when that enforcement results in the infringement of the parolees’ constitutional rights.