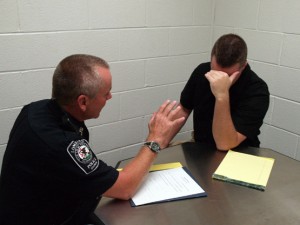 ” [A]ny lawyer worth his salt will tell the suspect in no uncertain terms to make no statement to the police under any circumstances.”   Justice Robert Jackson, Chief United States prosecutor at Nuremberg trials and Supreme Court justice, in Watts v. Indiana, 338 U.S. 49 (1949) (emphasis supplied)

Should I talk to the police?  I am often asked this question.  The person will say that a police officer has repeatedly requested an interview just to “ask a few questions” or “to get my side of the story.” My answer is invariably “No.”

If you are being investigated for a crime, it can never help to talk to the police.  This is often counterintuitive.  Many people believe that if they are innocent of the charges, they simply need to explain.  But if the police are talking to you, it is because they are hoping to obtain additional evidence to arrest you or to make a stronger case against you, or to obtain statements that can be used against you at trial. And despite any implication to the contrary, the police do not have the authority to make deals or grant a suspect leniency in exchange for getting a statement.

Law enforcement may come to your home, or your place of employment and their requests can be quite threatening and intimidating.  But remember, you are never obligated to talk to the police.  This is true whether or not you are in police custody.  Most people know about “Miranda warnings” – that the police cannot question someone under arrest or in custody unless they are advised of their right to remain silent and to have an attorney present. In Miranda v. Arizona, the Supreme Court held that the admission of an elicited incriminating statement by a suspect not informed of these rights violates the Fifth Amendment right against incrimination and the Sixth Amendment right to counsel. Thus, if law enforcement officials decline to offer a Miranda warning to an individual in their custody, they may interrogate that person and act upon the knowledge gained, but may not use that person’s statements as evidence against him or her in a criminal trial. But if you are not in custody, there is no obligation for the police to give you these warnings.

Bottom line:  if you are being asked to speak to the police, politely tell them NO.  If you are in custody, tell them that you do not wish to answer any questions and that you would like an attorney.  And if you would like to see a compelling lecture by a law professor giving you the “Ten Best Reasons Not to Talk to the Cops” watch the video below: