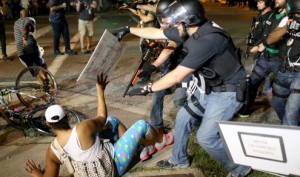 Reports of police brutality and excessive force have become a fixture of the news cycle over the past several years.  In July of 2014,  Eric Garner died in Staten Island, New York City, after a New York City Police Department  officer put him in what has been described as a choke hold for about 15 to 19 seconds while arresting him on suspicion of selling “loosies” (single cigarettes).   In November of 2014, 12-year-old Tamir Rice  was fatally shot by a Cleveland police officer while carrying a pellet gun in a playground. And in April of 2015, in North Charleston, South Carolina, following a daytime traffic stop for a non-functioning brake light,  an unarmed Walter Scott was fatally shot in the back eight times as he ran away from the scene.

Law enforcement officers acknowledge the problem:   A Department of Justice study revealed that a whopping 84 percent of police officers report that they’ve seen colleagues use excessive force on civilians, and 61 percent admit they don’t always report “even serious criminal violations that involve abuse of authority by fellow officers.”

The headline making cases are just the tip of the iceberg.  As a criminal defense attorney, I all too often hear  accounts from clients of interactions with law enforcement resulting in brutal and seemingly unjustifiable excessive force. When does police behavior become “excessive force?”  While police are allowed to use reasonable physical force to apprehend and subdue a suspect,  some officers use violence to punish, intimidate, coerce confessions or intentionally inflict pain.  Tasers, police batons, police dogs, pepper spray and handcuffs all have the potential to be abused during an arrest.

What should you do if you have been arrested and charged with a crime and believe that the police used excessive force?  First, document what happened if you can.  Take photographs of your injuries; obtain medical treatment; get contact information for witnesses if available.  Then contact an attorney who specializes in civil rights cases involving police brutality.  Do this before taking any plea in your criminal case!  Even a finding of “probable cause for arrest” can make it difficult, if not impossible to  win your excessive force case.