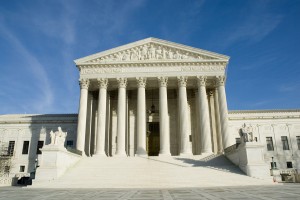 Today, in the case of Riley v. California, the United States Supreme Court ruled unanimously that police need to obtain a warrant before searching a suspect’s cell phone, a sweeping endorsement of Americans’ 4th Amendment right to digital privacy.

The decision applied to two cases – one from Massachusetts and the other from California – that raised the question of whether police could access the contents of a cell phone in the same way they could search a driver’s car following an arrest, or whether standards for cell phones should be different because of the personal information they contain.

In the California case, the defendant Riley was stopped for a traffic violation which eventually led to his arrest on weapons charges.  An officer searching Riley incident to the arrest seized a cell phone from his pants pocket and accessed information on the phone which implicated the Riley in a gang shooting that had occurred a few weeks earlier.  The defendant moved to suppress all evidence that the police had obtained from his cell phone.  The trial court denied his motion and he was convicted.

The Supreme Court overturned Riley’s conviction holding that the police generally may not, without a warrant, search digital information on a cell phone seized from an individual who has been arrested. While there are exceptions to the general rule prohibiting warrantless searches incident to arrest – police may search the area within the arrestee’s control to justify officer safety interests and also to prevent evidence destruction – those exceptions do not apply to cell phone searches.

Police agencies had argued that searching through the data on cell phones was no different than asking someone to turn out his pockets but the justices rejected that argument.  Chief Justice John G. Roberts wrote in the opinion “Modern cell phones are not just another technological convenience.  With all they contain and all they may reveal, they hold for many Americans the privacies of life.”  He went on to say that “The fact that technology now allows an individual to carry such information in his hand does not make the information any less worthy of the protection for which the Founders fought.  Our answer to the question of what police must do before searching a cell phone seized incident to an arrest is accordingly simple – get a warrant.”

This decision has important consequences for citizens.  In the past, police officers who seized cell phones incident to an arrest were able to snoop through their contents at will, in a “fishing expedition” to find incriminating evidence.   Now that the highest court in the land has ruled this conduct unconstitutional, police will need to first apply for search warrant, supported by probable cause, before doing so.

This is a landmark decision that will help protect the privacy rights of all Americans.