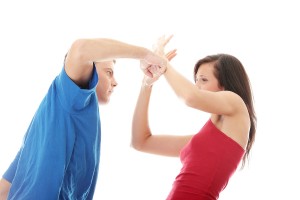 Recently, while many around the world were following news of the 2014 World Cup tournament  in Brazil, an Olympic gold-medal winning soccer star in the United States made headlines for her “off the field” conduct.  Last weekend, Seattle Reign FC goalkeeper Hope Solo was arrested and charged with domestic violence in Kirkland, Washington, for allegedly assaulting her sister and nephew in her sister’s home.  Law enforcement’s approach to this incident illustrates how the pendulum has swung dramatically over the past 25 years, from a hands off approach towards a focus on protecting the victim.

Accounts of the incident differ.  Charging documents say that Solo was arrested after police responded to a 911 call about a disturbance in the home.  When the police arrived, Solo’s 17 year-old nephew told police that Solo was drunk, initiated a fight, and punched his mother in the face when she tried to pull Solo off of him. Yet according to Solo’s defense attorney, the nephew was the aggressor and Solo herself was injured during the melee.

Many domestic violence cases arise from similar facts. An argument between family members or romantic partners turns physical, someone calls the police, and when they arrive both sides point fingers at each other.  Prior to the early 1990’s, the general policy of police departments was to treat domestic violence as a private matter.  When responding to domestic disturbances, police officers were trained to simply “keep the peace.”  In those days, law enforcement response erred heavily on the side of “staying out of it” and the victimized party – usually the woman – would be left with no protection or recourse (remember the 1984 Farrah Fawcett movie “The Burning Bed” ?)

In 1994, the O.J. Simpson trial raised public awareness of domestic violence and the pendulum began to swing in the opposite direction. While Simpson was acquitted of his wife’s murder, the public learned during his trial that his wife had repeatedly sought police protection from his physical abuse, to no avail.  Since then, there has been a significant shift in law enforcement’s approach to domestic violence so that the focus is on intervening to protect the alleged victim.

Now, in California, the police are required to arrest the aggressor when reporting to a domestic violence 911 call.  So long as there is a complaining party and some slight corroborating evidence, someone is going to jail.  Even if the “victim” recants, often the prosecutor will push forward with the charges, on the presumption that the victim is only recanting because she is intimidated by her abuser.

No matter how minor the incident that gives rise to the charges, the potential negative consequences of a domestic violence conviction are great.  For example, a conviction for domestic violence in California almost always requires a mandatory 52 week long class, an order to stay away from the victim, and weapons restrictions.  It can also affect a divorce or child custody case.